Review: A Prince on Paper by Alyssa Cole

A/N: This review was written before last week’s review of Can’t Escape Love, but when I was finished with this post, I realized that I couldn’t leave it at that. Which is why I bought another one of Alyssa Cole’s novellas so that I could write another review. I adore Cole’s books, and I really wanted to love this one. Alas.

A Prince on Paper: The Story

A Prince on Paper follows Nya Jerami and Johan von Braustein’s journey to their Happily Ever After, complete with fake relationship and lots of hot sex. There are squee-worthy scenes and tropey goodness en masse.

Nya is addicted to video games, especially the dating simulation “One True Prince” (yes, the Acronym is OTP, and of course she romances Prince Hanjo, Johan’s video game counterpart). She struggles with the past deeds of her abusive father and fears to fall into the trap of another serial liar with Johan.

Johan is afraid of loss and therefore doesn’t want to love, because love inevitably leads to loss. He had his first extended appearance in A Duke by Default, and already his vulnerability shone through. He’s perfected the role of playboy prince not only to distract the public eye from his younger sibling and heir to the crown Lukas, but also to keep everyone at a distance. 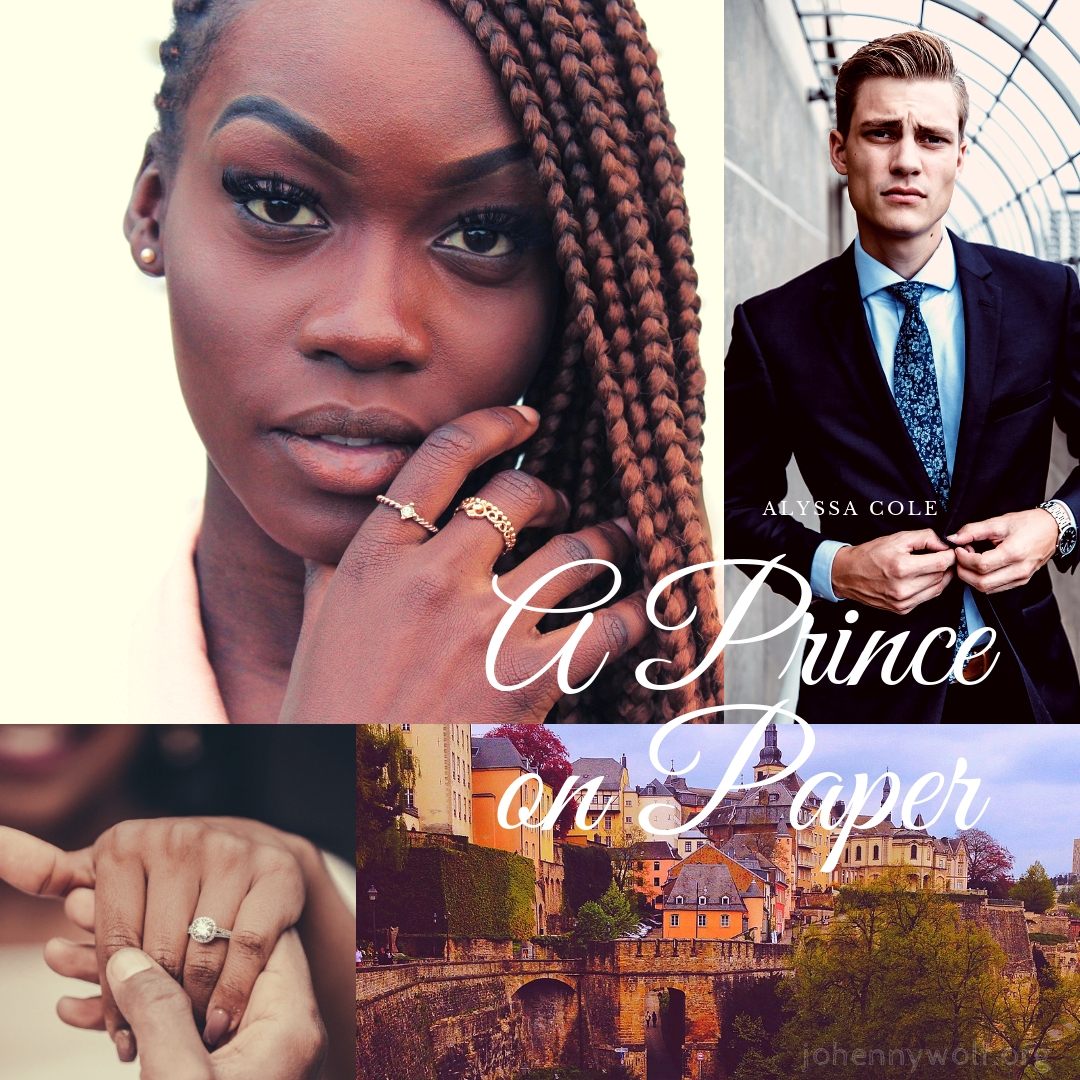 Mild spoilers from here on out.

The story reads a little episodic, with several heavily foreshadowed moments, like the diplomatic visit to Njaza, that ultimately are dealt with quickly and without the slightest hiccup. I kept waiting for shit to go down, until I was so antsy with anxiety that I couldn’t relax anymore. The only thing I could think of during the encounter at the opera was OH SHIT SOMEONE’S GOING TO WALK IN ON THEM. It was so stressful.

I learn something about myself in every book of Alyssa Cole I read. I cried when I realized how much I had in common with Portia (from ADBD), how her problems in life were basically my problems, and that there’s maybe a reason to it. So, a heroine like Nya, with father-induced-damages, should hit the mark for me. It should be easy to identify with her.

(I loathe the term daddy issues, because it places the responsibility for psychological damages on the person having the “issues”, the victim, and not on the one who inflicted the harm. To be clear, the term isn’t in the book, Cole doesn’t use it once. I just wanted to mention that I hate it.)

Nya’s damages are different from mine, but I can emphasize with suffering the effects of a toxic father-daughter relationship. So much. When Nya stood up to her grandmother and let her hurt spill over, I cheered, because yessss, tell them bby! I’m bitter, and I know those moments when the bitterness washes up and fills your throat because the people you love ignore the damage you’re branded with.

But those moments of realness were rare. Even though Nya’s fucked-up-ness was cited in the big confrontation between Johan and Nya at the end, I…couldn’t feel it. I didn’t feel like it had any impact on their relationship.

We see Nya actively working to overcome the poison planted in her mind by her abusive father. But it never feels like a challenge to overcome the lies she’s been told in the past. I don’t see her fail in assessing a situation. She’s acutely aware of every instance when her past influences her thoughts. A toxic thought creeps up and Nya instantly recognizes it.

There’s no instance of her father’s gaslighting and abuse creeping up on her in those insidious ways it does in real life, poisoning your relationships, your self-image, basically everything. Each time her father reaches out to her, Nya is aware of his attempts at manipulation, and even though she SAYS he got his claws in her and she’s vulnerable to his manipulations…she doesn’t actually succumb to them. She sees everything so clearly.

Of course, maybe her struggles were there and I just didn’t see them. Because there was another thing that constantly threw me out and kept me from really immersing myself in the story: linguist upset.

Now, I don’t want to go too much into it because I’m not innocent when it comes to doing atrocious things to other languages. I probably committed several sins in this post already. I’m writing books in English, but my native language is German. I live in Germany. There’s no opportunity to speak English in everyday life for me, apart from chats with friends at the other end of the world. I read books and blogs and I watch TV and YouTube videos in English and I’m fairly fluent, but it’s still a second language and I make mistakes. I lack context. For example, I didn’t know that “chink” is a slur for Chinese. I thought it was just a word describing a sound, the chinking of glasses. It was only when someone TOLD me about it that I learned, because you don’t learn those things through osmosis.

So, I get it. I also get that Johan’s home Liechtienbourg is a fictional country with a fictional language. I guess it’s inspired by Luxembourg, one of the smallest European countries, the last Arch Dukedom in the world. The official languages of Luxembourg are French, German and Luxembourgish, which is a German language. It seems obvious to combine French and German for the invented language of Liechtienbourgish. Sadly, language doesn’t work the way Liechtienbourgish does. BUT I can live with it. It’s fiction. The fact that it throws me out of the story every time it’s on the page is a me problem.

However, the language problems complicate a lot of things, and they leave me wondering about the last big press conference the royal family holds. It takes place in Liechtienbourg, so presumably it’s held in Liechtienbourgish, but that would mean that some things don’t work like they do in English. Considering that Liechtienburgish is an almost made up language mashed together from French and German, it would have made sense to look into how pronouns, especially the equivalent of singular they (the whole reason for this press conference), are handled in either language. (Of course, it’s quite complicated there, so I get taking the easy route and sticking to English. And it’s probably just me going through the mental gymnastics of trying to translate the signs shown at that press conference into a FICTIONAL language.)

Now, here comes the thing I learned about myself with this book: I can’t shed the concepts associated with certain words.

I’m writing erotica in English, and one aspect of that is that I feel no shame or inhibition using certain words. BECAUSE I DIDN’T LEARN TO ASSOCIATE A CONCEPT OF SHAME WITH THEM. They came to my brain fresh and innocent as petals. I don’t feel weird writing “cunt” or “cock” or anything. I suppose that the fact that I’m writing in a foreign language is what makes it possible for me to write about some of the things I write to begin with.

Yet, I still have these concepts for German words. And so I cringe EVERY. SINGLE. TIME the antagonist named Arschlocher is mentioned. Because I know that this right there, someone with the last name “Asshole-er”, a politician at that (though I thought he was a journalist at first), is an impossibility. Especially in a country and language that DOES have the same (or similar)  linguistic concepts as I. I’m sure it’s supposed to be a clever wordplay, a hidden easter-egg like innuendo, but it took it a bridge too far for me. (I went through telephone books and checked with a statistic tool to make sure I’m not claiming bullshit because of a (VISCERAL) gut reaction. This name doesn’t exist.)

This antagonist seemed much larger to me than he ultimately was, thanks to his name. Consequently, his antagonism fell somehow short for me.

A Prince on Paper does have its wonderful, shining moments. Johan is adorable. So eager to love, so vulnerable, so sweet. He thinks in knife and blade metaphors that come from his nationality (and Nya gently teases him for it), and this makes both him and his country feel more real. The worldbuilding is wonderful (with that one glaring exception). Maybe I would have been able to sink into the story if the language had been completely made up. As it was, I wished we could have lingered with Sanyu and Shanti (King and Queen of Njaza with marriage problems), but I’m willing to bet they’ll get their own book. I will read it, because Alyssa Cole is a queen. But A Prince on Paper was more miss than hit for me.