Wait, that’s not what you talk about with your mom?

It’s been a few days since I returned home from my little vacation with even more need to recuperate. I brought home a bunch of new story idea and a bladder infection (yay). Now I’m planted firmly atop a heated cherry pit cushion (that’s the German way – hot water bottle or cherry pits. My father in law suggested schnapps).

I stayed with my mom for a week, the longest I’ve stayed with her in the past few years. Most of my week long stay, I spent watching mother hens herd their chicklets around. There were a LOT of chicks. Around 50 of them, to be precise, all running around the yard chasing flies and worms and each other. The Orpingtons looked like little vultures with their grey feathers and naked heads. They were a rough bunch, full on chicken teenagers. Meanwhile the baby Brahmas were adorable with their feathery pants and their wide-legged gait. And each time the rooster sauntered across the yard, I couldn’t help bursting into giggles. Only my mom (with her non-existent English-knowledge) could name a cock Moby Dick. 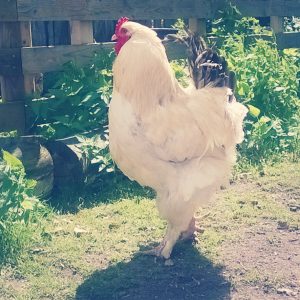 The Orpingtons, resting for once

While we chatted over fried goat milk semolina porridge, she observed how much I had changed.

“You used to be such a prude! I hardly recognize you anymore!”

You know, my mom prepares everything with the milk of her own goats. And the milk of the only goat she’s still milking tasted awfully of buck while we were there. Apparently, that’s a thing when they’re in heat? Bucks piss in their beards to woo their harem, so they smell awful to us humans. Don’t touch them, you won’t get rid of the smell – trust me, I know. Now imagine getting food for a week that’s made with milk tasting of that… Let’s just say, I took my coffee pitch black.

Since pineapple is supposed to turn semen sweet, and I can tell from experience that I hate it when ogre had fast food, I wondered, naturally. As I didn’t have my ogre with me to test my theory, I asked my Mom for her experience. She’s so used to the taste of goat milk that she didn’t even notice the musk of it though, while my little one and I struggled with every bite we took from that roasted semolina porridge. Chances she would notice it somewhere else were slim. As I asked her, her eyes went wide, she looked at me like I was an alien, and grappled for words.

It’s not something I want to actively imagine her doing either, but I was still disappointed that I couldn’t get an answer to my question. Sadly (or rather, luckily), we didn’t manage to scrape enough milk together to make cheese. The chickens turned over a bucket of fresh milk one day and ate it all, so I couldn’t take any cheese home to feed it to my ogre. It would have been a sacrifice I’d been willing to make. For science, of course. As long as I didn’t have to eat the musky cheese myself.