Lana Fox posted about what erotica should be during dark times, and as I have a lot of feelings about this topic (and also because they were so incredibly kind as to include my response on Twitter in their post), I’m trying to put something into words that I’ve been carrying around for a long time now. Sometimes (all the times, honestly), 140 characters on Twitter are just not enough. (Especially not when I don’t have access to my computer and have to operate Twitter on my phone.) 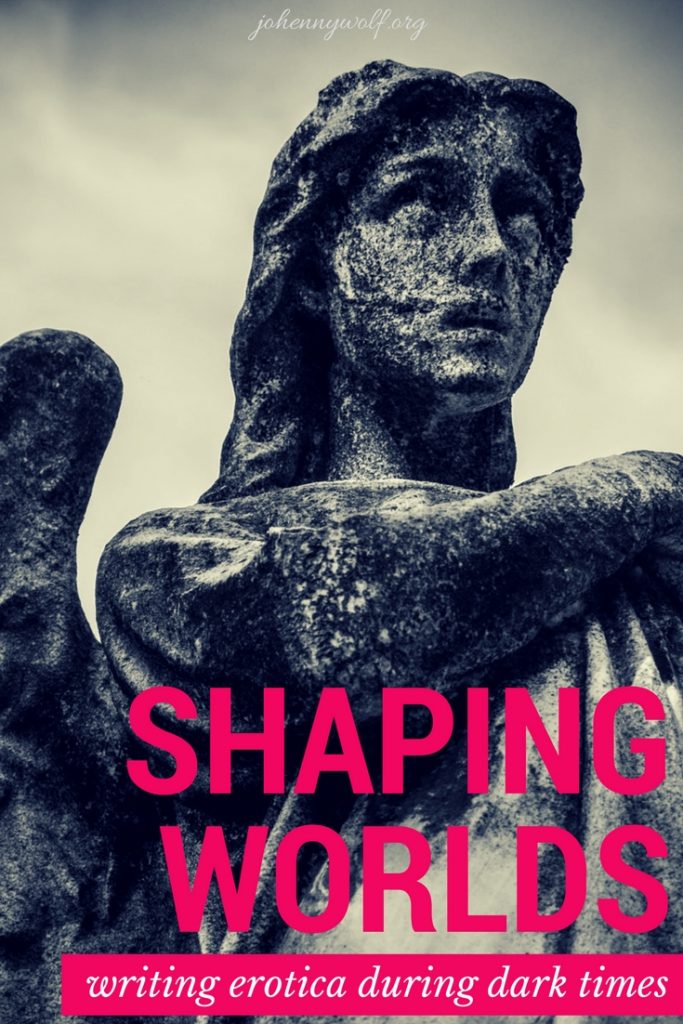 November last year, two things happened within a week, two things so terrible that they reduced me to a hot mess.

The first thing was that T*ump was elected president of the US. I’m not a US citizen and I could only watch as he got elected, a man so triggering that I could hardly bear seeing him on the news. Since then, no day had gone by without him assaulting the world in the news like he used to assault pussies. It was a shock, and it felt like stumbling and falling into an alternate reality.

In a way, even though I’m a European woman living in Europe, T*ump encroached upon my life as a woman by encroaching upon the whole world and pervading everyday discourse everywhere. There were people – men – who told me not to be so negative. Who knows, they said, maybe he’ll do a good job. Maybe he is exactly what America and the world needs. In that discourse, female bodily autonomy and sovereignty was just a commodity. Not important in the grand scheme of things.

The second thing happening in that same week in November was more immediate and with a harsh impact on our everyday life. A young woman from the next town was found after five days of searching for her, brutally raped and murdered.

Something like this never happens around here. It’s a thing you read in the news, yes, but it’s a rare thing and never happens here.  Here where I live, people’s sense of safety is rather high. Or, it used to be. This is not a place where you get murdered. The only thing you fear when you go out for a walk through the vineyards is that you encounter a group of wild boars. Those are the real danger.

But now a life had been crushed, huffed out, and our whole region was in shock.

My thoughts kept circling around the young woman and the terrible thing that happened to her. I couldn’t stop thinking how much she had to suffer, how terrible her last moments had been. My heart broke for her, and kept breaking. It still breaks when I think of her.

In a world where it’s possible to suffer a fate like this, a fate that happens every day and everywhere, over and over – how can I keep writing stories of sex, stories of submission and dominance, of punishments and pain and pleasure, stories reveling in humiliation and playing with shame?

I my mind, I could no longer separate sex and assault. It kept bleeding together into a foul mixture, reeking of decay. There’s this smell that I still remember from my youth, when I lived above a butchery; once a week, the waste – things that couldn’t be used in some capacity, like the content of stomachs and colons and pieces of meat and bones – would be picked up by a special truck. The smell of that truck is like nothing else, and it would linger long after the truck had left again. It was this smell that was filling me up from inside now, like something had crawled into my lungs and died there.

I had spent the better part of the year working on Salt and now found myself unable to look at it or anything else I had written that year. In Salt, a former princess finds that in becoming no one, like her father curses her to be, she finds the freedom to pursue and explore her sexual self in a way she couldn’t before. In a way, I had lost that freedom and had become clogged with the reek of violence against women. How could I write about a woman craving the pain of a whipping and going out unabashedly to get what she craves, when there are women being beaten to death every day?

I failed at disentangling the pain and trauma and kicking free of my hopelessness. It was my sister who finally helped me out of it and added a new perspective: “In a world like this, it’s especially important to show another side. To show the consensual aspect of a dynamic, to show a world you want, and to give people joy and hope. The world needs to see the beautiful parts, the good things, the lustful, enjoyable things, or it will drown in depression and become the dark place it sees.”

As a Parapsychologist, she knows that words shape reality. We see it with T*ump and his ilk as they’re shaping a reality for their believers. But they don’t own words and language, so by writing, I’m pushing back, make the words mine and help shaping the reality I want. And maybe I can make someone happy or just give them a pause from the terrible reality they find themselves in.

I’ve carried these thoughts with me since last November, yet never found the right way to put it into words. I’m incredibly grateful that there are people who can do this far more eloquently and stringent than I ever could, like Lana Fox of Go Deeper Press did here. They write, poignant and profound:

So I don’t care what great erotica should be. I care about how it’s written, and whether it grips you, and affects you. I care about whether its intentions are kind. But that aside, is it making you laugh when you need to? Does it turn you on, when you thirst for arousal? Does it lead you into darkness, when you need to find your shadow? Does it have you so gripped that you can’t put it down?

Whatever you need erotica to be is exactly what erotica should be.

I couldn’t say it better.

Sometimes, pushing back is hard. But I don’t want my reality taken from me. So I keep writing and fighting, kicking and sometimes screaming. And I’m so grateful that there are other people out there like Lana Fox doing the same.

Looking at the world right now, we need it dearly.

Next Story
Take It Where You Find It