to be a writer
Tag Archive 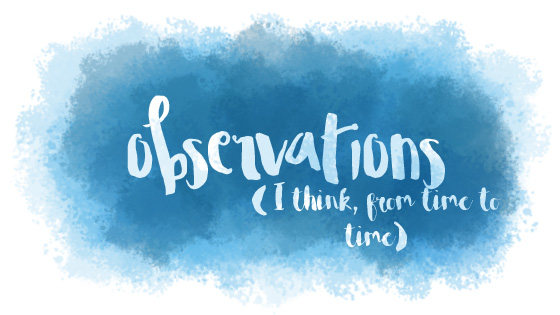 It’s easy to get overwhelmed and disheartened when browsing ebook categories and trying to work out the space where your own story fits. *Knowing your market* can easily drift off into *the market is full already there’s no space for me*. Maybe it’s not that important to know the competition, though. Sure, always do your research, but maybe the most important thing amongst it all is just to WRITE YOUR STORY. So, there are 1001 naughty fairy tales out there… but not yours. And if fanfiction taught me one thing, then it is that the thirst for certain tropes never dies. There are countless variations of ONE idea/trope, but all of them are unique, and they all have their readers. So I will not hang my head. There’s a lot of space in the universe.

My inner critic is a liar

I have my self-doubt so ingrained in me that it’s hard to get past it. My inner critic is constantly telling me that I’m not good enough, that I will never succeed. That I’m a failure, and a disappointment. My inner critic is a filthy liar, though, and maybe I just have to give him the face of someone I despise so as to learn to unhear him. My inner critic is a cold-hearted man with a burning loathing of those living in a world of words and stories. He begrudges them their dreams and thoughts because he never was allowed to follow his dreams, and no one ever thought he could have even one sensitive bone under his pasty skin, no thought beyond what’s sensible and pragmatic. He calls it reality, he calls it truth, but it isn’t. It’s his grudge speaking out of him, his disappointment with himself.

My inner critic wears a familiar face, and I must not trust him. My inner critic is a liar, and I have to emancipate myself from him. I have to learn to believe in myself. And anyway, even discipline can be learned. All it needs is structure and time. I don’t have structure, but I do have enough time to build it.

Daring to be a writer

So yesterday, the peeps of Team NaNoWriMo asked on Twitter when we knew we were a writer.

Truth is, I still don’t know. When I was 14 – and that is half a lifetime away now – I decided that I wanted to be a writer. I wrote, I even started my first book. I wrote short stories. One story even involved a love affair of some ordinary girl (me) and a vampire. Gosh, I could be rich by now. But alas. When I grew older, I thought it unrealistic to achieve my goal and really become a writer. I knew I could write, my texts were witty, funny, utterly sarcastic, but I never managed to actually finish a story. When I finished school, I still didn’t know what I could do other than write. I thought about becoming a gardener, a photographer, a tailor. But after my last exams in school I realized I was pregnant. Every dream I ever had came to a halt. And since I didn’t want my daughter to be an only child, I got pregnant again.

Then I had two kids and still no idea what I wanted to be other than a mom. I wrote about my daily adventures with my girls, and this made me realize again what the one thing is I do best. It may not seem that way, since English is not my first language, but I’m really good with words. Written words, anyway. Make me talk in front of real people and I stumble over that slippery puddle of quirky sentences in my head.

So, when I was 25 and my girls both in Kindergarten, I started studying German Language and Literature. Right the first academic told us that we’re wrong here if we wanted to write. I followed through anyway, got my degree with two kids and everything in six semesters like a normal student, and I wasn’t even bad. And although I love books, I love literature, I came to deteste the pretentious academical world.

But that first academic was not totally right with his statement. I learned a few things about writing. Not technique, but how to research and how to endure the bleakest and most stressful times, and those two abilities were the most precious to me. But my final lesson, the one that showed me that I really am a writer came shortly after I finished studying. I submitted a short story to a prose writing contest of my alma mater in coop with a scientific publishing house, and I made third place. My story got published, and so I could call myself a published writer.

The lesson I learned there was that I had to dare to be a writer. The daring part is the most difficult for me. Since I finished studying, I wrote down first drafts for two novels, from beginning to end, and NaNoWriMo helped me a lot there, in showing me that I really could write a book from start to finish. But I haven’t submitted my manuscripts anywhere. I haven’t looked for agents or publishers. Yet. The daring still is the biggest difficulty.

But there is never a challenge so big you can’t get past it. That’s another lesson I took with me from my studies. You may think there’s no possible way you can do this, but you can, if you only dare.