Time for a quick retrospection of what I have been up to, what I’ve read, and what’s lying ahead. (Heads up: I’m writing about adult themes, so there will be adult language) 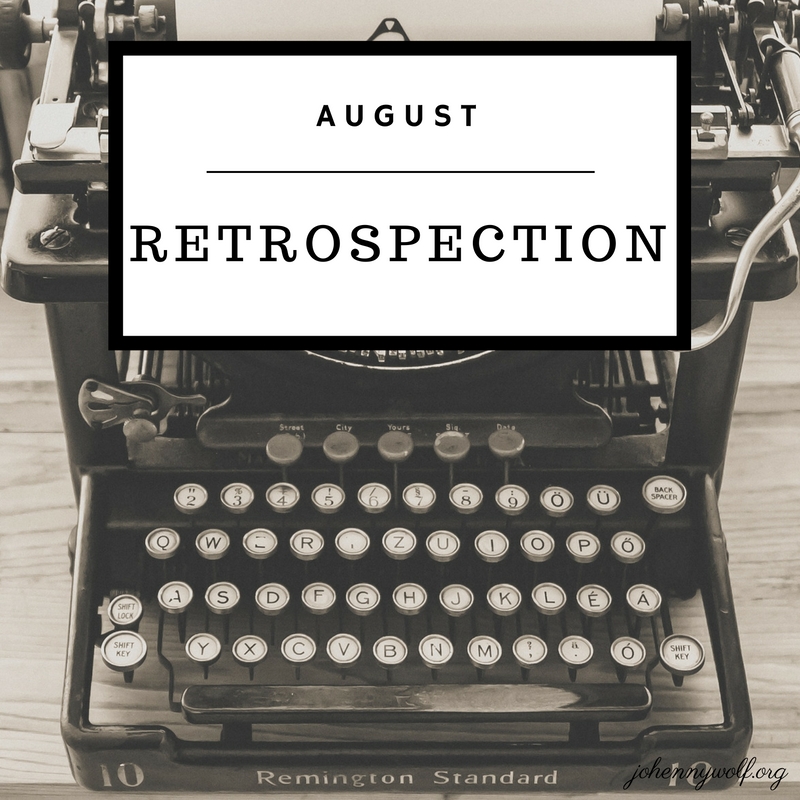 I’ve been rather quiet these last two months. The reason for this is simple: I’ve been writing a new story, and it has captured all of my attention. I came out of a six months writer’s block and wrote 50K in a month. WOOT! Initially, I just wanted to write a short story I could give away on here as my new freebie, but once my supposed short story crossed 15K, I slowly started laying that plan to rest. Now that the story is finished (well, kind of — let’s say, the third draft is done, but there is still a huge chunk of work ahead… ), I started a story set in that universe, a bonus chapter so to speak, which will become my new freebie.

While I immersed myself in the fairytale world of my story (yes. It’s a fairytale. With BDSM. Isn’t that glorious? Read on for a snippet below), I realized why working on other projects — like A Choker of Lace, Initiation, or this blog — was so hard for me lately: As much as I love those stories, they don’t hold my passion as much, and working on them is a chore. Which is okay, I’m absolutely willing to do my writing chores, and I don’t abandon the project that is Choker of Lace. But right now, I’m passionate about my twisted fairytale. I loved writing it, which is why I have hardly written anything else. And I’m already planning the next story!

But first: I have plans for this story as well. From childhood on, I’ve been fascinated with fairytales. So it’s only consequent that now, I would write my own. With a twist, of course, because I love writing about sex. I love the emotional roller coaster of navigating relationships, consent, love and sexuality, and I love to wrap it all with a pretty bow made of fairytale-ribbons. And since my ultimate goal is to write a collection of illustrated twisted fairytales, I figured why not start right away.

Now, my writing skills are far more honed than my painting skills, so I fully expect this project to take quite some time before I’m ready to release it into the world. And I realize that it’s probably not the best idea to start another huge project with the unfinishedness of Choker of Lace looming over me like a spiked shadow with needle-sharp teeth. (Dramatic, much?)

I can see the illustrations. I dreamed of them while I was writing. They’re integral part of the visuals of this story, and without them, it would miss a large part. And I would always be disappointed with myself for chickening out of this just because I think my art isn’t good enough. So, I’m going to push myself. I’m competitive, if only with myself. In fact, I hate competition with others, but I always want to be better than I am now, and the only way to do that is to keep learning and going forward. (And hey, if I end up ripping out my hair and biting my nails bloody because I just can’t get it right, I can still decide to publish without illustrations first. But at least I will have tried then.)

Last month, I read the fairytale anthology Ruby Slippers, Golden Tears after it was recommended to me by a friend. Sadly, I was not impressed, and some of the stories even made me rather angry. One of those that had me up in arms was the Rumplestiltskin-story Masterpiece by Garry Kilworth. This story has its own blog post sitting in my draft folder, hopefully I will get to it soon.

I also read 2k to 10k: Writing Faster, Writing Better, and Writing More of What You Love by Rachel Aaron, which helped me tremendously with increasing my wordcount. I was brought to my attention through the Write With Impact podcast, another thing I can’t recommend enough. (I’ve started listening to podcasts while doing my hated household chores, like cooking and folding laundry, and besides Magic Lessons, Tanis, The Black Tapes and Dear Sugar, I’m religiously listening to this one… but I digress.) I’m not writing 10K a day, sometimes not even 1K, but I took away one simple trick from this book that changed a lot in my way of approaching my writing: Always know what you’re going to write, and be excited about your writing. I didn’t suddenly turn from a pantser into a plotter, but I’m learning to outline more, and think ahead more, instead of sitting down to write whatever comes to my mind. And this made a huge difference. I wrote 40K last month, and I’ve been excited about every single thing I wrote.

In September, I will start my illustration project and do at least three separate illustration (I will keep you posted on my progress). I will also finish the bonus chapter for my twisted fairytale, and start outlining my Bluebeard horror tale. I want to write at least three blog posts (about aforementioned topics… and some of those I promised in the past but never got around to actually doing because I’m easily distracted by shiny new objects, by which I mean: stories).

Okay, now I will no longer keep rambling. For those of you who are interested, here’s a snippet of my story; the working title is Salt, but I’m still searching for something… different. Which includes the word Salt. I don’t know, titles are hard.

He tilted his head, narrowing his eyes. “Why did you run from us? We might have taken you for a fawn, and killed you with our arrows.”
“I was scared.”
He looked at Delia with his eyebrows drawn together. She held his gaze until she remembered with a start that she no longer was equal to a nobleman. She was no one. Quickly, she lowered her eyes, fixating them on the black hooves of his horse.
“Scared of what? Have you been attacked?”
His question came as a surprise, but when Delia looked down at herself, she realized the picture she presented: wearing nothing but a thin chemise with a suspicious stain on her lap where the juices from blackberries had faded from crimson to brown. If it weren’t so cold, she’d blush.
“No,” she murmured, and hesitated for a moment. She had not been attacked yet, but who knew how long she could keep wandering the woods without stumbling into danger? Drawing herself up, she admitted that she was lost. “I haven’t been attacked. But I need help.”
“It’s a trick, my king. Look how green her eyes are,” someone said. It was the same man that had wondered if she was one of the folk from under the mountains, and Delia wondered why the green of her eyes made her somehow more suspicious.
Then she took a closer look at the man blocking her way. If he was a king, there was a great chance he knew her. The land was littered with kings, though, and although he seemed more familiar now, she couldn’t place him with certainty. That alone was a bad sign.
“It’s curious, that’s for sure.” The king rubbed his chin. His face struck her as odd, but it took a look around at the other men to tell why that was: unlike all the other men in his hunting party, and even all the men Delia knew from her father’s court, this king was shaved bare. It made him look young, hardly older than she was. The shock of curls surrounding his face, the color of dark amber, tousled by the wind and the fast ride, only added to that impression.
Delia caught herself staring, and looked down again.
“How can I be of help to you, girl?” the king asked after another moment of silence, broken only by the horses huffing and stamping their hooves.
How could she ask for his hospitality when she no longer was someone? How could she ask for kindness when her father had cursed her to lead a miserable life? Yet, could she live any more miserable than now? Delia pressed her meager bundle harder to her stomach. What if she managed to live the humblest life, the wretched existence her father had condemned her to, and still managed to be content in it? She lifted her chin. “All I ask for is a place under your table, and I will live from what falls down from it. You won’t even notice me.”
The king raised his eyebrows. They looked like wings, darker than his hair, and sharp. “A place under my table?”
There was no room for beggars at a king’s court, Delia knew that. Everyone had a function to fill, be it ever so small. “I will repay your kindness in whichever way you want. Give me whatever humbling task you can think of, and I will do it. I will scrub the floors and sand the kettles and clean the hearths, I will herd the pigs if you order me to. I will serve you in any way you ask.”
One of the men snorted, and the king seemed to battle a smile, too. It tugged at his lips and twinkled in his eyes. “Clearly, you have no idea about the humbling tasks one could do at a king’s court.”
“Then show me.” Delia felt sick over her own daring. She didn’t want to find out how far off she was with the tasks she had named, didn’t want to know what humiliating services this king could ask of her. Yet, her heart pounded in her chest like the thrumming hooves of wild horses, and she was seized by something powerful, almost like triumph.
“Alright. Lift her up.” The king waved, and behind Delia one of his men sprang off his horse and stepped to her side, grabbing her hard around the waist. She shrieked, taken by surprise, and tried to wriggle out of his grip.

I’m so excited for this story, you guys. If you want to be the first to be notified when the bonus chapter comes online, and when the story is going to be published, join my Mailing List!

Next Story
Nanowrimo 2016: Embarking on adventure