Up next in the series of Twisted Fairytales

Now that Salt is finally out, it’s time for me to get on with the next twisted fairytale — after all, I want this to be a series. I have a short list of fairytales I want to write, but as all of them are rather dark and in the realms of erotic horror, none of them seems a good fit for a continuation of what I started with Salt. Especially not since I want the next story to revolve around Durwin, Aiden’s gruff and rough man in Salt. He’s a difficult character to begin with, so I don’t want to put him into a story that makes him fully irredeemable and unlikeable — only a little. After all, I’m all here for complex and complicated characters.

Since there is no story on my list that is a good fit for Durwin, I spent the last days searching a home for him in another fairytale, and I think I found the right one. Apart from being not too dark, the story had to fulfill other conditions as well: I don’t want to lose any momentum I may be able to build up by writing in a completely different niche, so apart from having kinky bdsm elements, it also has to be hetero (I’m so sorry, I promised my dear friend Ann to finish the lesbian fairytale I started forever ago… I will do that next!) and predominantly mdom. I hate to limit myself too much in terms of what to write, but I also have to eat, so there is that. Additionally, I don’t want to tell the ever same stories that are repeated over and over again, so Little Red Riding Hood, Snow White, Cinderella and Sleeping Beauty are out.

I get the draw of those stories, I do. They’re familiar, like your favorite pair of sweatpants, cozy and worn in and you know them inside out. On one hand, this makes it easier to get an “oh wow what a twist” effect, because they’re everyone’s favorite sweatpants, and people see it instantly when there’s something different about them. So it’s much easier to get the “oh clever” reaction this way. On the other hand – there’s hardly a twist that hasn’t been done, so it’s difficult to come up with something new and exciting. It’s hard.

With fairytales that are are a little more obscure and not on the forefront of everyone’s childhood memories, it’s harder to create the big revelatory wow-moment (provided that’s what you’re after) when dressing them up in a new way. But then, everything about them is new and exciting, and it’s even more satisfying if someone does find the easter-eggs and meta-moments in your stories. Salt, for example. It’s a retelling of the Love like Salt trope: folktales of Aarne-Thompson types 923 and 510. One of its iterations can be found in Shakespeare’s King Lear. That’s where Delia’s name comes from: Lear’s daughter Cordelia. In the play, she’s courted by the King of France.

According to Geoffrey of Monmouth’s account History of the Kings of Britain written in the 12th century, she’s said to have married the king of the Franks after Lear banished her. In Shakespeare’s play, he doesn’t get a name, but legend/history (which, to be fair, is nebulous since it’s far back in the past and also part of 12th century legitimization fiction identifies him as King Aganippus of the Franks. Now, that name is a mouthful, so I passed on naming my male main character after said king. Instead, I named his horse after this king of the Franks. But that’s just a little anecdote on the side.

Back to Durwin and his fairytale. He’s not only a gruff grumbler, he’s also very much anti-fae, so I want his story to force him to reexamine his stance on this matter. I didn’t find a tale that would force him to get over himself by falling in love with a fairy, but I found the next best thing: a werewolf. 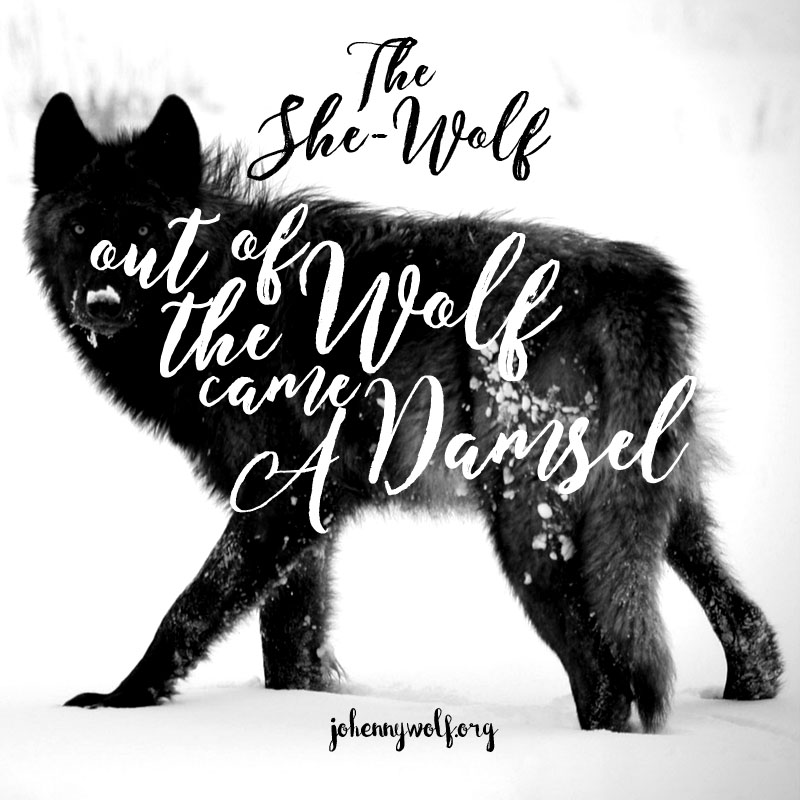 Once Upon a Time there was an enchanted mill haunted by a she-wolf. One day a soldier went there to sleep and watched from a hiding place how the wolf came and took off its skin, turning into a woman. When she lied down to sleep, the soldier took away her skin and nailed it to the mill wheel. Then he woke the woman (shouting at her!).

She woke up in fear and called for her skin, but since it was nailed to the mill wheel, it didn’t come to her. And then — I kid you not, there is no in between, it’s literally the next sentence! — the pair married and had two children. But the woman was always unhappy, for she used to be a wolf. One day her son, who’d heard about the story, asked the father if it was true, and the father told him where the wolf skin was. The son told this to his mother, who thanked him for rescuing her and took off with her skin to never be seen again.

#it’s all about the ellipsis

Now, this story has a huge dubcon factor to it, with the soldier stealing the wolf skin and forcing her to be something she is not. And the fact that she disappears as soon as she learns where he keeps her skin points strongly into the direction of forced marriage and marital rape. So why would I choose this story as less dark than the other ones on my list (stories like Bluebeard, The Robber Bride, or Hänsel and Gretel)? It’s all in that empty space between the soldier waking the wolf and them marrying.

It’s a lot like Kleist’s The Marquise of O. who’s rescued from an attack but then, while unconscious, is raped by her rescuer and finds herself pregnant with no idea who did it. The rape of the Marquise happens within the space of a dash; just like this dash, the possibilities in The She-Wolf lie in the ellipsis.

However, I’m not going to turn this into a rape story. Durwin is a rough character, yes, and there will (probably) be rough sex, but I will figure out a way to make the story less rape-y. The beautiful thing about fairytale retellings is that I can take the bare bones of a tale and shape it into a new story that reflects on the problematic aspects of its source material. For this, The She-Wolf offers a lot of room, and I’m absolutely positive that I can turn a 1 1/2 page story into a 40 -50K book.

What do you think? Are there any stories you want to see twisted? Let me know in the comment section!

the book of twisted fairytales

Next Story
Cupcakes and Bees