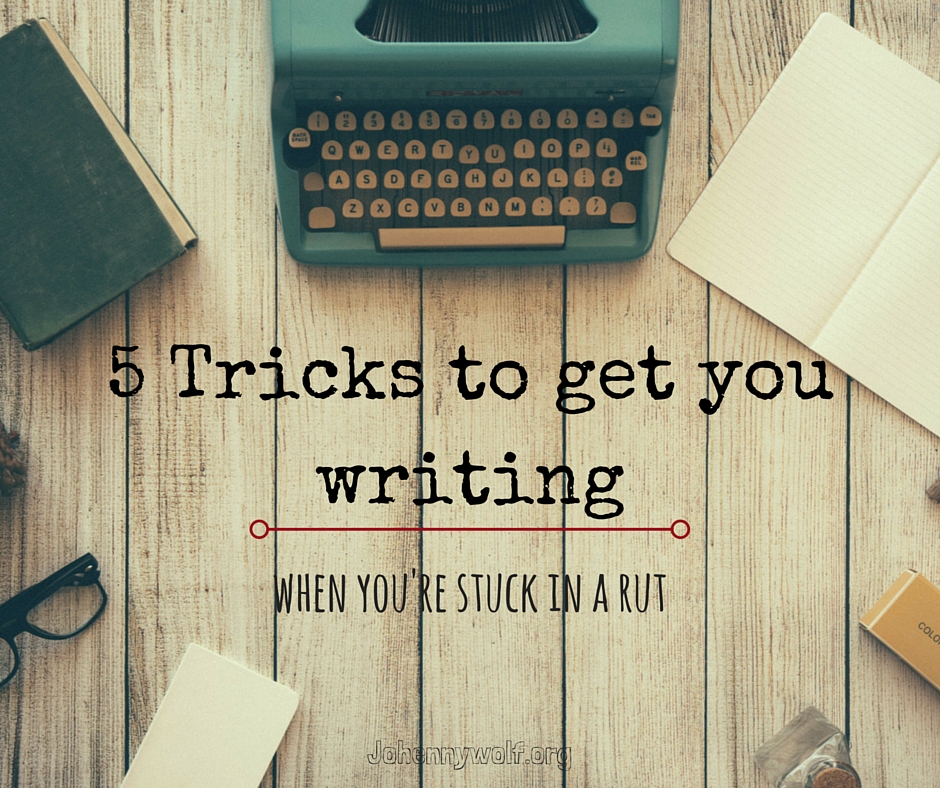 You don’t have to write every day to be a writer. You’re still a writer when you’re between stories, when you haven’t written a word in weeks. That’s okay, and no reason to feel guilty, because guilt just makes it worse. So this is not meant to be another stress factor by telling you that you have to write in order to be a writer (TM). But sometimes, you want to write, you have the time and you have the ideas, but as soon as you sit down and put your fingers to the keyboard, some great incapability overwhelms you and the resistance is too big to push against. When you know what you should do, and want to do, but for some reason don’t manage to do. I found that the following five tricks helped me when I was stuck in those cruel phases, and in times of trouble, I regularly go back to them.

I know that’s easier said than done. The key to routine is doing something consistently over the course of several weeks. Now, the difficulty with being in such a phase is to GET yourself doing  the thing (in this case: writing), so one trick is to make a schedule: Set an alarm every day and sit down to do the thing when it goes off. If you know you write best in the mornings, set a time in the morning. If you work better at night, set it to that time. But no matter what, when the alarm goes off, you do the thing. You may feel crappy and uninspired when you start, but I promise you, when you’re done, you’ll feel better. But it’s important not to overdo it, so setting a reasonable goal is super important – see #2.

When I first started to build a writing routine into my days, I set a daily wordcount goal of 300 words. That might not seem much, but it’s more than nothing, and it’s doable. It’s important to keep your goals achievable, or you will easily feel overwhelmed and incapable of doing what you’re asking of yourself. Some people write 1000 words a day with ease, some 8000 or even 10 000, and some write 100 words a day. If you set yourself a reasonable, easily achievable goal, you’ll find yourself easily writing more, thus giving yourself a feeling of success and accomplishment. It’s much easier to write (or do your thing) if you feel great after doing it.

Keeping track of your wordcount is also a great tool. It helps you to counter the nagging voice at the back of your head telling you that you’re not doing enough to reach your goal. Whenever that happens, you can whip out your spreadsheet and prove it wrong. Everyone is a collector in some way, and collecting words in a chart and see that number steadily climb is a great trick. To make it extra easy, you can download the excel sheet I make for myself every year HERE  (rightclick – save as) and use it to track your stats. There’s also a google sheets version.

If you’re anything like me, you probably check tumblr or twitter or facebook every few minutes for several minutes… or hours… Interrupting your work flow will make it a lot harder to go back to it. It’s incredibly hard to resist, but you don’t have to resolve to using a typewriter or writing longhand (unless that’s your thing); there are some tricks to keep you from leaving your writing and trawling social media or the great wide interwebs. No research is so urgent that you HAVE to do it right now and can’t write another word before you haven’t found out where exactly those condemned to be hanged were hanged in London in 1826. One trick that worked for me is to write on a mobile device where you haven’t installed any social media apps. A lot of people these days have not only a desktop computer/laptop, but also a tablet and a smartphone. We write as we go and sync to a cloud. If you tend to wander from your writing to other apps, maybe it’s a good idea to reserve one of your devices to remain social media-free. In my case, that’s the tablet. Another INCREDIBLE useful tool for your desktop pc is this little gem here: Writer’s Block. It’s a simple editor that will block you from doing anything else until a certain number of words or a chosen time is over.

All the tips above are great if your main problem is procrastination – so, you’re having ideas and your problem is just to sit down and do the writing. If you’re stuck, though, or out of ideas, keeping a writing routine will only help to a certain degree. It won’t help you to overcome the aversion you might start feeling after a while towards your story, and it will only partially help in unscrewing your flow of ideas again. A great way of getting back in the mood is having someone to talk with about your story. I don’t mean a beta reader or editor by this (although they can be your beta reader).  You won’t be looking for suggestions how to make a draft you’re working on better. What you need is just someone to bounce off ideas, or talk about the way you plan your story to go, because sharing this excitement can double it (and you’ll probably have a ton of fresh ideas just by talking about your story). If you have someone reading along as you write and being hungry for the next snippet, invested in your characters and excited about what’s going to happen to them, it can cheer you on and help you find your own enthusiasm again. This can be a two way street that works for the both of you if you are their cheerreader for them. Finding this significant other can be a bit tricky, but the internet offers great possibilities to connect with other writers, and it’s really worth it. Don’t give up if you don’t immediately click with someone.

Do you have other tricks and tipps that help you in phases when nothing wants to work? Share them in the comment section!

Next Story
The Beauty and the Beast trope